Hi there! I’d like to introduce myself as a new author. My name is Imelda Rose Sobiloff and I just published my first book, Martina Ballerina. I wrote it because I love dance, children and reading. But there’s more to the story than that.

I actually wrote the manuscript for the book nearly 30 years ago when I was post-career as a stay-at-home mom with two small children. I entered a writing contest back in 1989, from the Authors/Writers Network of NY and NJ. To my surprise and delight, I won their top award: The Supreme Storyteller Award! 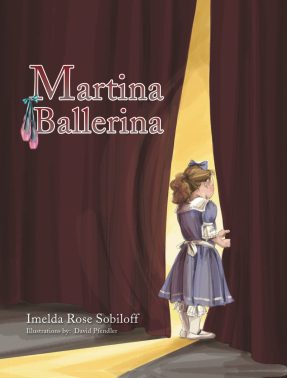 Fueled by this success, I sought publication. Martina Ballerina made it up several levels at a major publishing house to become a final candidate for spring publication. But as ill luck would have it, it was cut. Another house was launching a competing book with nearly the same name: Angelina Ballerina. I knew then that my chances were zero to none. I put the manuscript aside and forgot about it.

All these years later my two adult children surprised me for my 60th birthday with the gift of a lifetime. They had dug up my manuscript, formatted it for self-publication and presented me with my own book just a click away from being on the market.

You can imagine how touched and surprised I was. I was blown away by this deeply meaningful gift.

I walked on air for a few weeks and then decided to take it a step further. I would craft, polish and present the best and most beautiful picture children’s book I was capable of.  I would transform the self-published version into a gold standard book for children with spirit and passion. I partnered with Archway Publishing to make this happen.

Then I spent months finding the right illustrator. I contacted a few of my favorite children’s illustrators—a long shot—but you never know. I received lovely words of encouragement but no commitments. So, I scoured the internet, looking at the major and minor sites, and I eventually found David Pfendler, a talented illustrator whose works included children’s books and, in particular, ballerina sketches. He turned out to be both professional and easy to work with. You can see his portfolio at davidpfendler.com.

After eleven months of work, Martina Ballerina hit the market in November 2017. I hope you like it! It was a labor of love. It is available on Amazon and Barnes and Noble.